3 Ways to Make Any Exercise Harder Without Adding Weight

These three strategies will help you get more out of your strength training without adding weight to the bar.

That is the most beneficial piece of advice anyone has ever given me about strength training. It's so simple--almost too simple--but extremely operative when you're trying to make exercises harder or more effective. And I've used it as the backbone of my training philosophy.

Sure, I love to push heavy weight around and have my clients do the same, but never at the expense of exercise efficiency, proper technique and safety.

There is definitely a time and place to keep loading on plates, but for enhanced results, you may want to master the move in other ways.

Here are 3 ways to make any exercise harder without adding weight.

1. Increase the Range of Motion

This sounds like a no-brainer, but partial reps, whether they're intentional or not, are way more common than they should be. Half and quarter reps have their place, but nothing will ever trump full range of motion when it comes to increasing size, strength and power.

RELATED: Stability Training Can Improve Your Agility and Range of Motion

A 2012 study in the Journal of Strength and Conditioning Research found that training with full ROM improved muscle strength and thickness more effectively than training with partial reps. A 2014 study concluded that ROM should never be compromised for greater external loading.

Wherever you think your full ROM is right now, there's a good chance you can improve it to reap additional benefits.

Let's take the Barbell Back Squat, for example. This is an exercise that often gets botched. People sacrifice technique for big numbers.

You need to evaluate the connection between your full ROM and your 1-rep max (or whatever you test for). If you have a 1RM Squat of 500 pounds, but only 60 degrees of knee flexion at the deepest point, two things are definitely happening: 1/ you are missing out on loads of glute activation, which occurs when you achieve 90-plus degrees of knee flexion; and 2/ you are squatting in the depth zone at which shear forces on your anterior and posterior anatomy are at their peak. 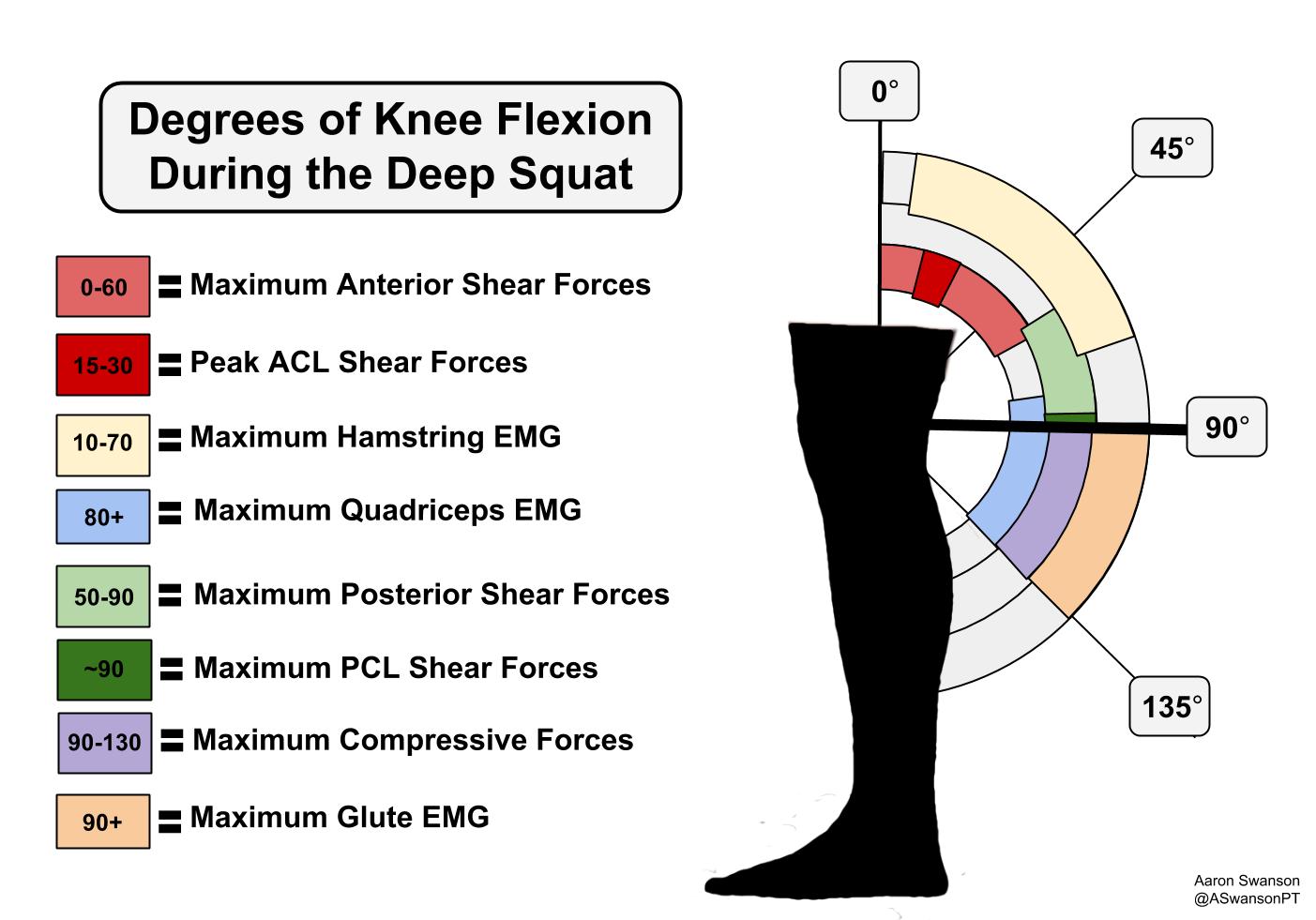 Five hundred pounds on your spine at the peak of shear forces doesn't sound smart, safe or fun to me. Even 90-degree squatters can improve their ROM, though.

According to Dr. Aaron Swanson, the 90-degree point of a Squat is where max shear forces occur on the PCL, on the body and on the posterior chain. In this case, you may want to go past parallel, to 100-135 degrees of knee flexion, to have the safest and most effective movement possible.

Imagine how much more impressive your 500-pound Squat will be with 110 degrees of knee flexion, decreased risk of injury and zero pain. Sounds like something I want to be a part of.

Trust me, I'm not the guy who says your Squat doesn't count if you don't go below parallel. Who am I to tell another person that his efforts aren't good enough? My goal is to tell you how you can continue to improve your performance, and one major way is to increase range of motion during exercise.

Of course, range of motion goes way beyond the Squat. You can increase your ROM in just about any movement. Below are a few of my favorites.

Altering your training tempo is by far my favorite way to make an exercise harder. Controlling the tempo makes for a more effective movement, and you master the technique with increased time under tension.

One surefire way to build new muscle and strength is to take advantage of tempo control. There are two common ways to do this, and I'm a fan of both.

Changing the tempo goes beyond actual movement speed. You can also change the tempo of the entire workout. For example, in Pat Davidson's legendary MASS program, he made great use of 30/30 and 20/40 work-to-rest ratios. With preset work and rest periods, plus suggested loading, you can really achieve a huge volume in a short time. Volume is a grossly underappreciated aspect of strength training. The benefits speak for themselves.

Beyond that, there are many other ways to alter the tempo and make an exercise harder. Rep schemes like AMRAP and EMOM, which are featured in my Barbell Barbarian program, are also great ways to increase volume at a faster tempo.

Since there are so many options, here are a few of my favorite tempo exercises:

Targeting the tension is a super impactful way to make any exercise harder without adding more weight to the bar. The best part is that there is really no wrong way to do it.

Simply choose a point of emphasis you want to target and use mind-muscle control during the entire movement to force energy into that area.

RELATED: Time Under Tension: The Secret to Building More Muscle

For those who still aren't with me, let's look at the RKC Plank. Instead of just holding a standard Plank, watching the seconds tick by, you want to force targeted tension into your core. To achieve this, you clench both fists, viciously squeeze your glutes, press your elbows so hard down into the floor that you're trying to break the ground, and then imagine trying to bring your toes and elbows together in the middle of your body (without actually moving them). Can you see how much more tension is being applied during this movement? That is how you target the tension.

Some of my favorite ways to do this include:

You can alter both of the exercises above to include all three strategies. I've mentioned range of motion, tempo and tension. I also love the RKC Plank and anything using Mark Bell's Slingshot Hip Circles for targeting glute activation.

Hopefully you can apply some of these tactics to your training and reap the benefits of variety. Remember, it's not about the weight, it's about the work!

How To Do A Kettlebell Snatch

The Turkish Get-Up for Youth Athletes

How To Do A Single-Arm, Single-Leg Push-Up

Should Athletes Do the Hack Squat?

Build Strength with a 5x5 Workout

Try Hindu Push-Ups for a More Muscular and Powerful Chest

The Ectomorph Workout Program: Building Muscle for the 'Skinny Guy'

Why Bear Crawls Are All the Rage Right Now