Why Fun Should Be the Focus of Youth Sports

The balance between free play and structured play has been lost, and early sports specialization has negative effects.

The benefits of physical activity in youth are universally well known and accepted in the fitness community. Wide ranging benefits include developing physical literacy, reducing the risk of obesity, improving cognitive function, teaching how to work in groups, improving self confidence and social bonding. In general, physical activity and youth sports participation are awesome!

But there is a problem. Youth physical activity in general is decreasing.

The benefits of physical activity in youth are universally well known and accepted in the fitness community. Wide ranging benefits include developing physical literacy, reducing the risk of obesity, improving cognitive function, teaching how to work in groups, improving self confidence and social bonding. In general, physical activity and youth sports participation are awesome!

But there is a problem. Youth physical activity in general is decreasing.

Here are the results from a paper published in the Journal of the American Medical Association. 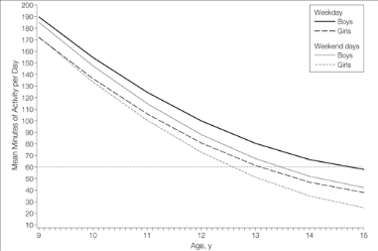 Physical activity decreased by greater than a third between the ages of 9 and 15—from 3 hours per day down to 35-49 minutes per day.

In addition, there is a fundamental difference in how young people play today.

Before looking at these trends, let's first briefly define some terms.

One form of physical activity is unstructured or free play. This can be defined as times when an adult is not structuring the interaction between children. The key is that the activity is driven by the child, not the adult. A common example is recess, when an adult is typically present but in a supervisory capacity only, not as an instructor.

In contrast to this is structured play. This is when adults regulate the interaction between the children. Adults dictate the rules, the progression and pretty much run the show. This type of play is mostly associated with organized sports such as baseball, basketball, football, etc.

RELATED: Why You Shouldn't Specialize in One Sport Too Soon

By incorporating free play into sports, we can increase the creativity and confidence of the athletes, both on and off the field. This translates into better classroom performance.

We all know how important rest is for training, and it's also true for almost everything else, especially after a task has been performed for an extended period. We also know that kids need breaks much more frequently than adults. So here, by incorporating free play into sports training, we can use play as a mental break.

Also, when free play is incorporated into sports, children are more likely to develop several important skills that extend into adulthood—ability to resolve conflict, work harmoniously in groups, negotiate and make decisions. Free play gives kids the ability to self-regulate their cognitive and emotional processes, which, by the way, are great predictors of academic achievement.

Now that we've defined the terms, what are the trends?

Like general physical activity, we also see a decline in free play. Research suggests a 25-percent decrease in free play and a 50-percent decrease in outdoor activities. In addition, there are also differences in how children play. Play has become more associated with learning than with enjoyment. For example, more emphasis is placed on learning the rules and how to play a game than on just letting the kids play.

During periods of sports play, there is little focus on actually enjoying the game. Instead, kids are more focused on the rules and how they are playing. This shift leads children to become more invested in the outcome of a game, and when they lose they are more devastated.

Before moving on, I want to be very clear and clarify my position.

I am not saying one form of play is inherently better than the other. My contention is that there needs to be more of a balance between free and structured play, and that as time has gone on, we seem to have lost that balance. Free play offers several unique benefits to child development, and reducing the amount of time for children to participate in free play comes at the expense of these benefits.

What does the increased attention on winning rather than playing lead to? Youth sports specialization.

Children's play has been occurring more and more in specialized centers, and this has become increasingly more common in early to middle childhood. To put it another way, a way I think a lot of people can relate to: there are no more pick-up games. The times when you and your friends from the neighborhood get together after school and meet at the park and just play—they just don't happen as much anymore.

Instead, kids get dropped off after school at sports specialization centers during the off-season and sport practice during the in-season. And that's it. That is how children spend their physical activity time, and there is little or no physical activity outside of these windows.

This has lead to a fundamental change in play. Again, it really isn't about having fun. It's about winning and being the greatest at your sport.

Now, it's OK to get excited about sports as a parent or a coach. The only issue is: don't drink the Kool-Aid. We all hear stories about people like Tiger Woods who started playing his sport at a young age and went on to become a dominant pro. Or about Jimmy from next door, who got a college scholarship to play the one sport he had played since he was 3 years old. Those stories tend to be exaggerated—and even if true, they are the exception.

I am sure most of you are familiar with the 10,000 hour rule. Although there is general agreement that the number of hours spent in deliberate practice and training positively correlates with level of achievement, a question remains: Does this volume of practice have to begin during early childhood? And does it have to be strictly limited to one sport?

A review published some time ago looked at all sports and asked when was the appropriate time to start early intensive training. Only one sport, gymnastics, showed a correlation between early training (before the age of 12) and success at the elite level. Every other sport was beyond the age of 12.

So early training doesn't lead to success. But it doesn't stop there. Early specialization has consequences. I will touch on three in particular that I think are relevant.

In a paper published in the American Journal of Sports Medicine, researchers followed 1,200 young athletes over five years. They found a significant risk of serious overuse injuries in young athletes who specialized in a single sport, regardless of age or how much they trained.

The relationship between specialization and injury was dose-dependent, meaning the more specialized they were, the more likely they were to have overuse injuries.

The second consequence of too early sports specialization is that the sport becomes less fun.

We all hear people say playing sports is fun, but it is often said to legitimize whatever sport is being offered. The reality is that for most sports, fun is secondary to excellence. We recognize this when we hear people ask young athletes, "Did you score?" "Did you win? " or "Did you get first?" This sends the message that sports are only about winning. Other reasons such as fun, learning, socializing, etc. are secondary.

For many, recreational sport is seen as "second class." What do I mean by second class? I'm sure many of you have heard the saying, "Not good enough to play for real." This fosters a stigma that can make recreational sports unattractive to children and parents. They want to play and enjoy sports, but they feel they aren't good enough, so they don't.

Both of these things change the atmosphere of play and lead to the third consequence: It kills interest.

It's a myth that early sports specialization leads to athletic success at a high level, such as going pro or getting a college scholarship. But coaches and parents persist in believing it, and in the process leave some kids sitting on the bench, not participating, not actually playing. At some point, they become disinterested, and the  disinterested kids end up choosing other things.

So where does that leave us?

On general, we see kids spending less time outdoors and remaining in the house instead.

Have any of you seen some of the new video games that kids are playing? They are incredibly realistic, have amazing graphics and seem almost addictive. As fitness advocates for youth, we are losing to them, and it makes sense. The games are competitive, they're fun, they are not exclusionary, they can be played with other people, and they're not terribly expensive. They are basically everything sports should be and used to be, but no longer are—and our youth are missing out.

Solutions to the Decline in Free Play

The overall concept of child-centered play is that if the goal is for children to benefit from sport now—in particular, if the goal is to increase physical activity into adulthood—it is essential to engage children in ways that are cognitively, physically and socially appropriate for their age.

Joshua Barreiro - Joshua Barreiro is an undergraduate student at Temple University studying Exercise Physiology with a concentration in Exercise and Sport Science. He has written several articles on ergogenic aides, exercise science, nutrition and scientific research. He has also delivered presentations at industry e
Become a Contributing Expert

How to Develop a Successful Mindset for a Youth Athlete

5 Things Sports Parents Must Discuss With Their Athletes

The One Word You Should Never Say to Yourself

Your Kid Sucks at Sports. 5 Reasons Why That's OK

How Parents Are Ruining Sportsmanship

What Parents Need to Know About Their Kid's Strength Training Program

Can The Dweck Mindset Method Help Your Kids Be Better Athletes?

Why Do I Sweat So Much?

8 Ways to Use a Weight Vest in Your Workouts

Build Up Strong Shoulders With a Muscle-Blasting Dumbbell Circuit

Why You Should Add Pull-Throughs to Your Workouts